Choose one of our e-retailers to order online. You will be redirected to the Bioderma's products page.

Above and beyond dermatology, we engage for the health of the planet

As a NAOS brand, we are committed to respecting life and aquatic ecosystems​.
Discover our commitment with Andromède Océanologie.

Through ecobiology, we consider the skin as an ecosystem made up of living cells that constantly interact with one another and with their environment. This means we are profoundly committed to respecting all living things and care deeply about the impact our products may have on the health of all ecosystems, including aquatic ecosystems. This is why, as a NAOS brand, we support marine researcher teams working to preserve these important source of biodiversity.

One particular commitment is to regenerate Posidonia, in partnership with Andromède Océanologie.

Andromède Océanologie is a marine biology research office which, for the last 20 years, has been working tirelessly to preserve the marine environment. Their Research and Development branch closely monitors the bio-indicators of the quality of water and coastal ecosystems, particularly considering key aquatic species like Posidonia. Their work in cartography has allowed them to estimate the surface area of Posidonia meadows, as well as observe the signs of their regression throughout the years.​

Posidonia is a major underwater ecosystem essential to the Mediterranean.  It’s also quite particular, in that no other underwater organism can perform its role in its place.

Sometimes known as the “lungs of the Mediterranean”, Posidonia meadows are a key source of oxygen in coastal regions.

The presence of Posidonia is an important marker for pollution, as they thrive in clean waters.

Posidonia are key to fighting against coastline erosion, as they are more effective than any man-made anti-erosion barriers at keeping coastlines intact by absorbing the impact of the sea swell and trapping the sediment.

It is also a place where certain species such as fish, molluscs and crustaceans produce or deposit their eggs, and a nursery for some species.

Posidonia affects every level of the Mediterranean marine ecosystem, from the nurseries of fish who live and feed in its meadows to the coastlines used by humans every day. It’s one of the most important ecosystems in the sea, but also one that is under constant threat of human activity, particularly by ship anchors and chains which churn and uproot the posidonia.

As a result, in the bay of Juan-les-Pins, there has been more than a 30% regression of Posidonia meadows over the last 5 years alone. If it continues to regress at this rate, it will disappear completely in only a few years.

Andromède has taken major regeneration actions (transplanting operations in areas that have suffered destruction of beds) in the Mediterranean, off the coasts of France.​

One of their key initiatives has been the REPIC project, to restore the Posidonia herbarium in the Crouton cove in Antibes, France.​

In the 2 years since launching these regenerative efforts, more than 90% of the transplanted posidonia has successfully taken hold, a promising statistic for future regeneration efforts.​ 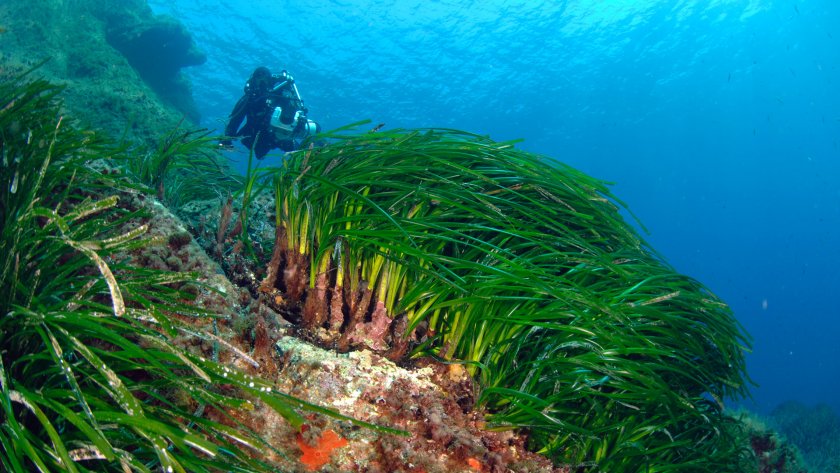 Anchoring in Posidonia meadows is illegal, but how can ship crews know where not to drop anchor without knowing where they are? This is why Andromède has created DONIA, an anchoring and consumer navigation application that offers the general public access to the extensive underwater mapping conducted by the Andromède team, allowing them to anchor outside of posidonia meadows. ​

Andromède also works with marine projects to help them reduce their impact on marine ecosystems and species such as Posidonia. ​

Where does NAOS come in?

The DONIA app is free and accessible to the public, but must always be kept up to date with the latest underwater mapping. NAOS provides funding to Andromède in order to keep this information as current as possible, to prevent ships from anchoring unknowingly in Posidonia meadows.

Learn more about NAOS commitments for the preservation of aquatic ecosystems

Sensitive skin exposed to the sun

Are you looking for the safest sun product for children, the highest SPF, or the best sun cream for your skin?

BIODERMA’s solution: Photoderm, a full range of sun products for all types of skin and sensitivity to the sun. Prevention of skin reactions including allergies to the sun or chemical filters, sun protection for sensitive skin, sunscreen for children or babies, specific sun protection for oily to acne-prone skin, dry skin or hyperpigmented skin...

Choosing sunscreen for sensitive skin: protection from the inside out

Questions about your skin?